A day without yodeling is like, well, a day without yodeling. Now, you need never be caught short again! You can have your very own copies of Sourdough Slim's immortal renditions of authentic and traditional Western music, plus some Sourdough originals. (You'll also impress the heck out of your friends with the wide range of your musical taste.)

You can listen to any of the underlined songs with the RealAudio RealPlayer G2 . Please note that these songs are posted in monophonic sound. The CD's are in full-spectrum stereo, sound much better and you won't have those annoying interruptions when the Internet is busy. 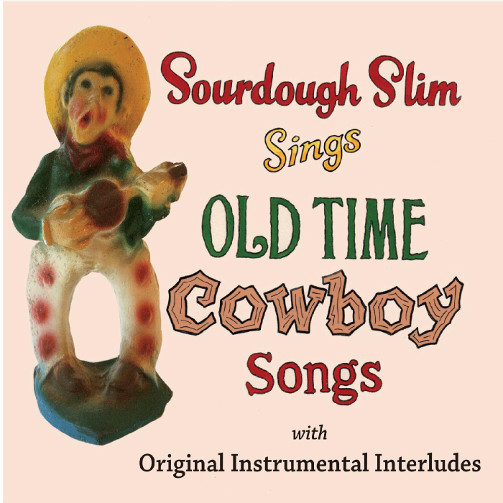 "Fabulous new CD. As good as anything you've done. Loved the instrumentals. Quite a variety. Like sitting around the campfire listening to you sing. So cool"
- Spike Barkin, Roots Music Ambassador, New York, NY 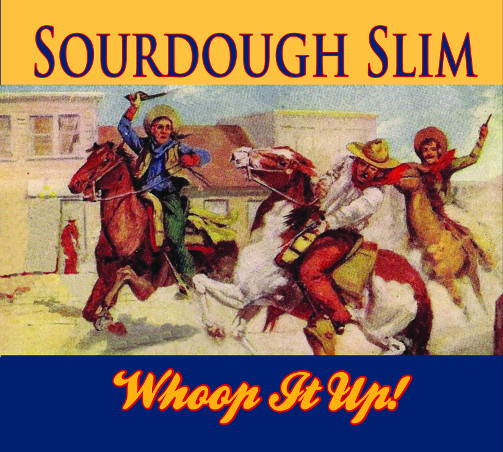 Whoop It Up!
Ten Gallon Hat
Ride That Bronco Buckaroo
Til Then
The Devil With The Devil
Jolly Cowboys
Conestogas Ho!
Jalapeno Polka
A Miners Tale
Shot Of Rye
Fruitvale Wobble
The Chuckwagon Waltz
Goin' Back To Where I Come From
Til Then Reprise
We'll Have A Grand Old Time 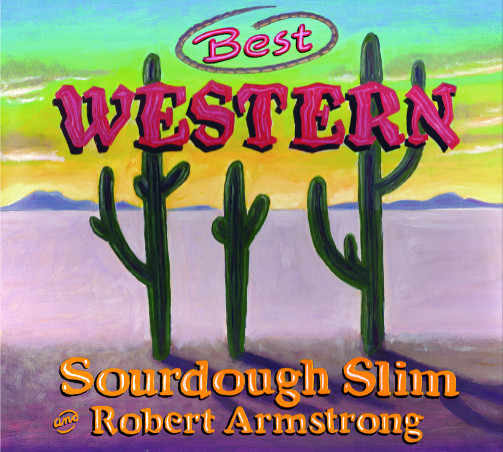 This stand out recording features hot pickin', old time harmony singing, stratospheric yodeling and the ethereal lilt of the musical saw. The passion and enthusiasm these two share for this great American roots music really shines through on these 15 classics.
I Can't Tame Wild Women
The Gal I Left Behind Me
I Ride An Old Paint
Milk Cow Blues
Sweet Georgia Brown
Red River Valley
What's The Matter With The Mill?
El Rancho Grande
La Golondrina
In The Jailhouse Now
Down Yonder
Blood On The Saddle
Goin' Back To My Texas Home
Drink The Beer Barrel Dry
Ghost Riders In The Sky 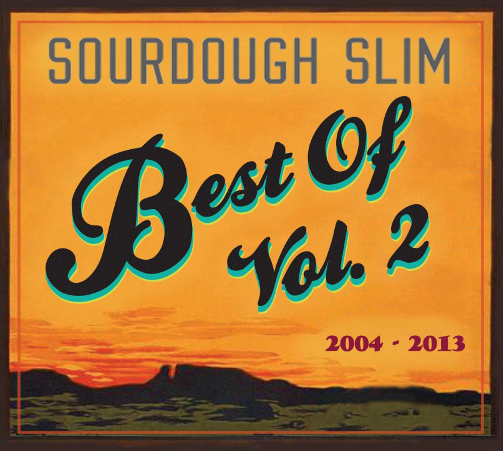 A collection of Sourdough's personal favorites (27 songs in all) from five CD's recorded between 2004 to 2013. What a bargain! A must have for long time fans and a great introduction to Sourdough's music for those uninitiated. Over an hour of yodeling fun!
also available at: www.cdbaby.com/cd/sourdoughslim3 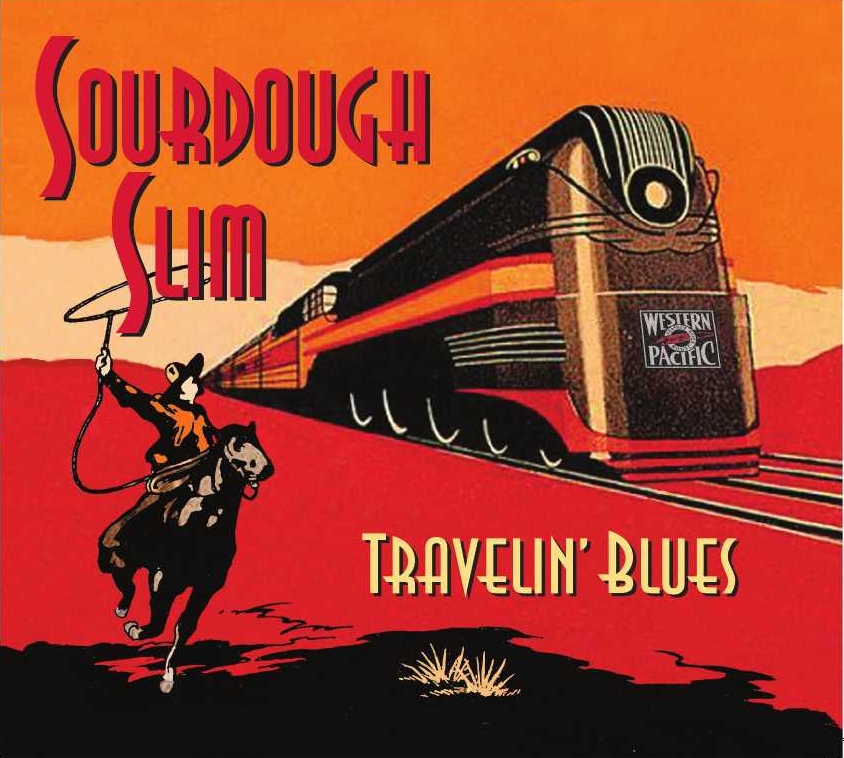 Sourdough's first solo release since 2008 is a real crowd pleaser. Seven great new original songs, cookin' country blues, cowboy classics and lots of yippie-ti-yi-yodeling. This CD rocks! Backed on many songs by the instrumental wizardry of Robert Armstrong. You'll definitely want to add this gem to your collection. Sourdough says "Some albums just fall together so beautifully, magic happens. This is one of those moments."
also available at: www.cdbaby.com/cd/sourdoughslim4
"Slim's new album, Travelin' Blues, is pure bliss....His take on Jimmie Rodgers' "T for Texas" is one of those songs you'd wear out if this was an actual vinyl record." - Christine G. K. Lapado-Breglia, Chico News & Review

Travelin' Blues
Cattle Call
Trouble Keeps Hangin' Round My Door
T For Texas
Farewell For Now
Everybody Does It In Hawaii
Oh, For The Wild & Woolly West
Western Skies
Mexicali March
The Days Of '49
Guess Who's In Town
Over The Waves O' Sage
My Mary
In Old Winnemucca
Mean Mama Blues
I Like To Yodel
The Big House Blues 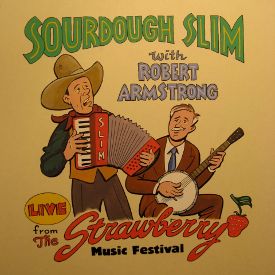 From their Main Stage and workshop performances at the Spring 2009 Strawberry Music Festival this CD captures these jolly troubadours of tradition in fine form. Whether their belting out a traditional blues piece, kicking up a hot novelty number, shining up an old cowboy classic or sharing a joke with the crowd, there is something here for everyone. Sourdough on guitar, accordion, uke and harmonica. Robert on national steel, banjo and musical saw. As MC Dallas Dobro says "Good Stuff!" 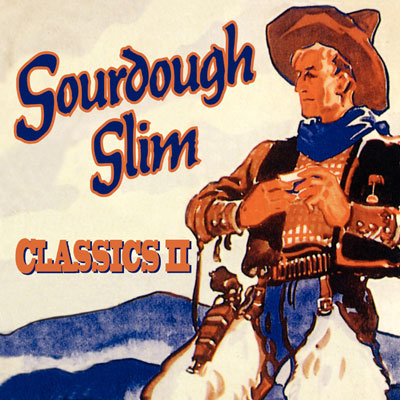 15 epic renditions of some of the greatest cowboy songs of all time. Sourdough follows up his hugely popular 2007 release with more of the best of the West on "Classics II." Backed up by some of the finest cowboy musicians in the business. Classic songs sung by a classic artist. 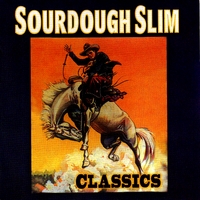 16 of the greatest cowboy & hobo songs of all time

You can't go wrong with this CD! Every song is a winner. Sourdough is at his best singing these classic songs of the trails and rails and believe me his renditions of these gems are like no one elses. Mostly recorded solo accompaning himself on guitar, accordion, tenor banjo, baritone ukulele and harmonica with occasional help from his pals Cactus Bob and John Girton on fiddle, clarinet, octophone, tuba and piano. For those of you who have been waiting for a CD with all your favorite western songs, here it is. A true classic!
also available at: www.cdbaby.com/cd/sourdoughslim 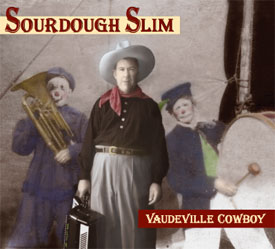 "Vaudeville Cowboy"
From the sideshow stage of the traveling tent shows of the 1920's and depression era years to follow take a trip through the eyes and ears of the Vaudeville Cowboy. This 2006 CD finds Sourdough following in the footlights of such illustrious entertainers as Tom Mix, Jimmie Rodgers, Col. Tim McCoy, Buffalo Bill Cody, W C Fields and Will Rogers during the heyday of cowboydom. 17 classic and original songs that reflect the impact of the cowboy and the West on the vaudeville and traveling tent show stages of yesteryear. Joined by his talented pals on such novel instruments as the national steel, tuba, french horn, piano, musical saw and banjo. The Big Show's Come To Town!


"There is no one today more versed in the great tradition of old time vaudeville and the tent shows that toured throughout the country in the 1920's and 30's than Sourdough Slim. Slim is a master showman and one of the finest musicians I know. Trust me - Sourdough Slim gets it!!!"
-Don Edwards 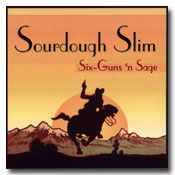 Six-Guns 'n Sage
Highly Acclaimed 2004 Release
"The album's strength lies in how fun and non-typical Slim's versions of songs are...much more invigorating than 9/10ths of the stuff you hear from the current cadre of western revivalists."
- Sing Out!, folk music magazine

The Best Of Sourdough Slim - Vol. 1

All titles are available in Compact Disc (CD) format for US $15 each. Prices include US postage and handling. For International orders, please add US $5 per order.

To order, send check or money order (payable in US funds) to: